You are here: Home1 / Thoughts2 / Uncategorized3 / Where Does Leadership Come From? 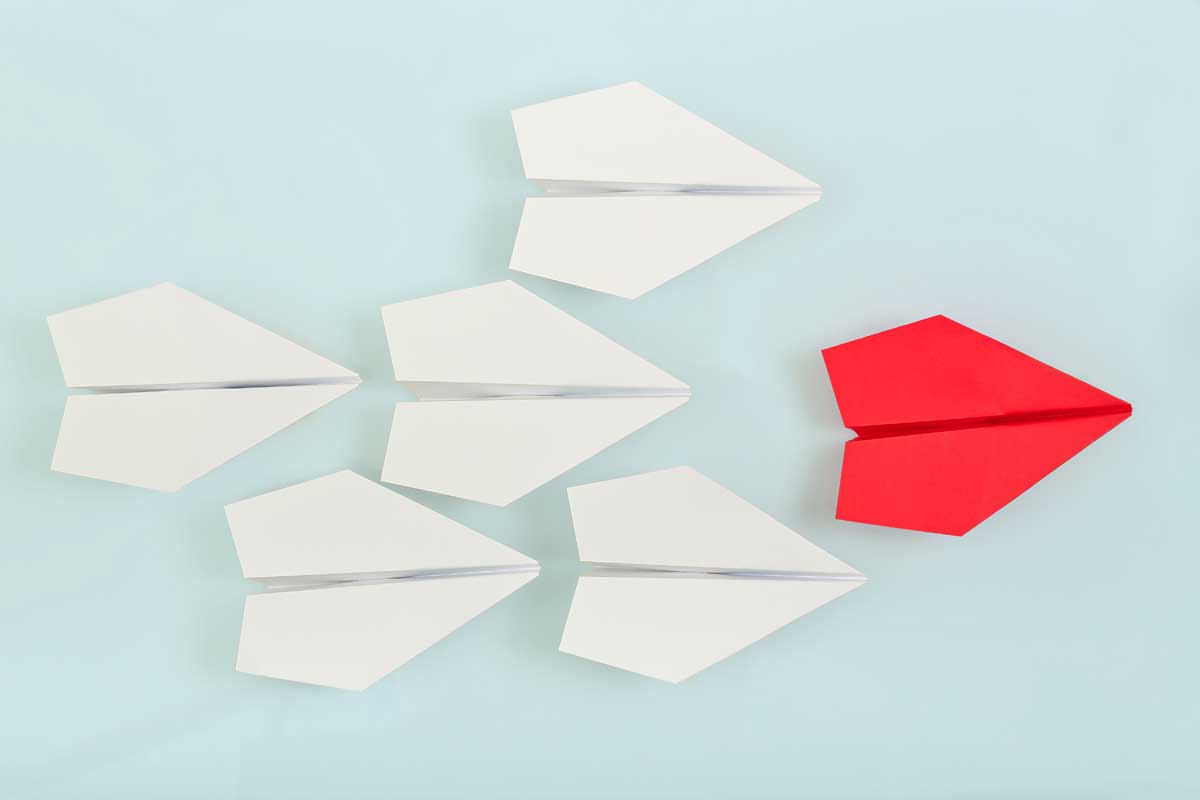 How exactly does someone become a leader? What confers “leadership” upon a person?

What are the sources of leadership authority?

The two dominant conceptions of leadership, used by leadership experts and leadership theorists, are that:

This will allow us to say more clearly what leadership is, and where it derives it’s authority from.

The Two Definitions Of Leadership

There are a lot of ways to think about leadership:

” … there are almost as many different definitions of leadership as there are people who have tried to define it.” – Peter Northouse, Leadership: Theory and Practice

Luckily however, there are two main concepts of leadership namely:

The other approach is to think of leadership as related to a position, with responsibilities. As John Maxwell explains:

“Most people define leadership as the ability to achieve a position, not to get followers. Therefore, they go after a position, rank, or title and, upon their arrival, think they have become a leader.” – John Maxwell, Developing the Leader Within You

The conceptions are both valid. As Peter Northouse describes in his overview of leadership models:

The individual acquires emergent leadership through other people in the organization who support and accept that individual’s behavior. This type of leadership is not assigned by position; rather, it emerges over a period through communication.” – Peter Northouse, Leadership: Theory and Practice

From what basis does a leader’s power and authority derive, in each case?

To understand this, we need to examine where leadership authority comes from for each of these two types of leadership.

The Two Sources Of Leadership Authority

Each of Responsibility Leadership and Relational Leadership are based in different sources of authority.

The Source Of Authority For Executive Leadership

Executive Leadership positions are created – by someone higher up in the organisation.

In doing so, they may create roles, and confer authority to these roles.

The power or authority of an executive leadership role stems directly from this delegation of authority by an organisation’s owner.

In other words, executive leadership authority is derived from delegation of ownership responsibilities.

Any power and authority for a position in an organisation ultimately comes from an owner.

An owner has ultimate responsibility for all decisions and for all outcomes.

In doing so, they can delegate responsibility and authority to those roles.

If you are the owner of a business or organisation, you are responsible.

You make the decisions.

You are accountable for success or failure.

You reap the rewards, or pay the costs.

You make the calls.

The buck stops with you.

Owners can delegate authority to roles in an organisation.

Authority Can Be Delegated Into Responsibilities

People in these roles are given responsibilities.

This is how leadership positions of responsibility are typically created in an organisations, and authority is conferred to them.

This Is NOT Only For Organisations

Ownership is not exclusive to large organisations.

Anyone who creates or buys any kind of initiative creates an “ownership” relationship of responsibility to the initiative.

They take on the responsibility.

We can think of this even more broadly.

If you have a child, you don’t exactly “own” the child, but you do take on a lifetime, or at least long term,  responsibility for that child. You take on “ownership” of that responsibility.

A country has an ownership structure of one sort or another. In the United States for example, the ownership is specified by the separation of powers into a Presidency, Congress, and Judiciary, with the Presidency, House, and Senate voted in by the people and the High Court Justices nominated by the President and approved by the Senate. Those “owners” – the representatives of the people – make executive decisions, and power and authority ripples downwards from there.

To take an even broader example, suppose you have a personal purpose or mission. No-one else can lead your personal mission, just as no-one else can do your push-ups for you. You are the owner of your purpose. You can enrol or engage other people in it – delegate responsibilities – but the responsibility for it ultimately rests with you.

For Executive Leadership, authority is delegated from an owner, who has responsibility and hence authority due to the responsibilities inherent in ownership.

The Source Of Authority In Relational Leadership

Recall that Relational Leadership views leadership as a “relationship between those who aspire to lead and those who choose to follow,” to quote Kouzes and Posner from The Leadership Challenge.

Where does leadership authority come from in this perspective?

Let’s start by taking a closer look at Relational Leadership.

There are four key aspects to take note of:

1. Leaders And Followers Both Benefit

Leaders and followers exist in a symbiotic, mutually reinforcing relationship.

They are pursuing a shared agenda, or they participate in some kind of mutually beneficial exchange.

“Leaders and followers are engaged in a common enterprise; they are dependent on each other, their fortunes rise and fall together, they share the results of planned change together.” – James McGregor Burns, Leadership

In a commercial context, the goals of a leader and of followers may be different, but still aligned. A follower for example may have goals to achieve certain outcomes, and the leader may have the goal to help them achieve those outcomes through a mix of free information and paid services.

Ultimately leadership is driven by both

“Leadership … is … inseparable from followers’ needs and goals. The essence of the leader-follower relation is the interaction of persons with different levels of motivations and … skill, in pursuit of a common or at least joint purpose.” – James McGregor Burns, Leadership

Both parties adapt to each other – but within limits.

Leaders can shape followers’ values, beliefs, and wants, but only within certain parameters.

Similarly, followers needs and values and beliefs can shape leadership, but only so far.

There must therefore be a basic level of fit or congruence between the goals, beliefs, values and outlook of leaders and followers.

Leaders add value in the relationship with followers. This value can take a range of forms, such as giving them guidance or information; stating forming or reinforcing shared values; or inspiring or motivating them.

3. Following A Leader Is An Optional Activity

Leadership is, as the saying goes, the art of getting things done by people who don’t have to do it:

“Leadership is the art of getting someone else to do something you want done because he or she wants to do it” – Dwight D. Eisenhower

Leadership theorist James McGregor Burns emphasises this choice as a moral imperative – if the choice is not freely made, it is coercion.

“… in responding to leaders, followers have adequate knowledge of alternative leaders and programs and the capacity to choose among those alternatives” – James McGregor Burns, Leadership

The view of leadership as “leaders leading followers” is undoubtedly useful. But it’s not complete.

The word “followers” can be misleading, as Relational Leadership doesn’t always denote a leader-follower relationship.

Sometimes leadership is building a consensus or coalition between partners – a group of equals.

Or a business leader might need to engage and enrol other market leaders into a shared project with benefits for all.

Indeed, sometimes a small player in a market may make a pitch to a larger player in the market around an opportunity that is of mutual benefit.

The focus of the leader here is not around “followers,” or at least not at first. It is actually around “stakeholders.” It is identifying relevant stakeholders, and bringing them on-board around a shared project or enterprise.

This, also, is a form of Relational Leadership.

Relational Leadership derives from an alignment of interests and values

Leadership authority flows from developing a trusted relationship, where followers (or partners) trust the leader to lead, and the relationship is viewed and experienced as mutually beneficial in some way.

For Relational Leadership, leadership authority derives from trusted, mutually beneficial relationships where the interests and activities of leaders and followers are aligned.

Leadership arises at the union (not intersection) of Executive Leadership and Relational Leadership. 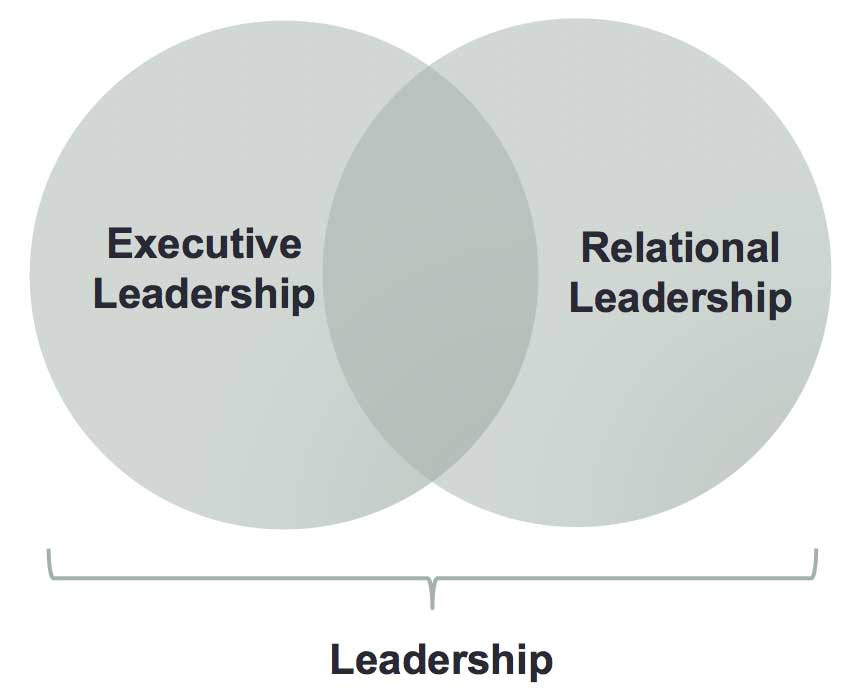 These Are Not In Conflict

It Could Be Both

If you are assigned an Executive Leadership role in an organisation there is nothing to stop you developing engagement and relationships – Relational Leadership – with your colleagues and your direct reports as well. You can, and you should.

Indeed, this is the main thrust of many leadership models. In John Maxwell’s “5 Levels of Leadership” model someone may be assigned a leadership position, but they still have to earn permission (engagement) before people will willingly follow them and give their best efforts.

Conversely, if you are a Relational Leader you may build an audience. For example, you might start blogging, and collect email addresses as people opt-in for updates. Having built an audience, a blogger might start offering products and services, creating a company, and then hiring staff. As they take on ownership for a company and hire contractors or staff, they start to take on a Responsibility Leader role.

If you are in business for yourself or are a senior leader within an organisation, you are probably drawing on both sources of leadership authority.

It Could Be Neither

Of course, not everyone is a leader.

Within an organisation, someone who is not responsible for the activities of any other people is likely not an Executive Leader, and if their activity is not reaching out to an audience, as for example in marketing, they are likely not a Relational Leader either.

Why Is This Useful?

These Distinctions Allow A Clearer Discussion Around Issues Of Leadership

Understanding where leadership authority comes from is a useful analytical tool, because it allows us to clearly demarcate who is or isn’t a leader.

For example, it can be said that someone is potentially or actually a leader if they have one or both of the sources of leadership authority.

By the above definitions,

is actually or potentially a leader.

I am passionate about activating human potential – helping make the world a better place.

I do what I can to improve the thinking and tools we have available in our industry and in the world.

I work with smart, creative leaders – transformation leaders such as coaches and consultants, thought leaders such as speakers and authors, and change agents and difference-makers –  to help them make a bigger difference through their work.

I help these leaders sharpen their ideas and messages to cut through and be heard.

And I work with strategy so that have clarity, the right plan, and the right action steps to get to where they want to get to.

You can learn more about me from my home page www.lauchlanmackinnon.com

Subscribe for regular updates from me at newideasandinsights.com. You can opt out at any time.

You can find me on LinkedIn at https://www.linkedin.com/in/lauchlanmackinnon/

Want to join the discussion?
Feel free to contribute!

Leadership is Love How To Position Yourself As The Expert And Authority In Your Field: Strategy...
Scroll to top